After posting to the PixelAtion forums, one of the regulars, Helm, did an awesome paintover to demonstrate some of the weaknesses in my approach. Succinctly, he said that I think too much in terms of normal art, just at low rez, rather than as actual "pixel" art, and that I needed to approach this work differently if I wanted to get better results. Here's the paintover he did (the shot with a green background is his version):

After studying his color and tone choices, I decided to take my work back to square one, and I began a greyscale study to focus on my tonal control. I think that I'll be working in greyscale only for a while, then move into color pieces once I'm more comfortable with my skills. In the meantime, here's the WIP version of my greyscale study:

EDIT: This went through another round of crits by Helm and another member, talking more about the details of the pixel art workflow. This is the resulting paintover by the two of them: 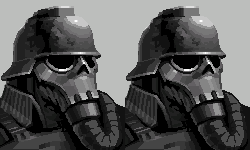 I took some time to download and try out the demo for ProMotion 6, a piece of software design for pixel art work. It's got a different mindset than standard digital art programs, but there's a tightly-controlled method to the madness. Here's my tonal block-in using this new tool: