I've finally found the time (and/or discipline ⌐_⌐) to start working on my own stuff. I'm on one heck of a Warhammer 40K kick, so I decided to continue my forays into Death Korp pixel art.

The first piece that I've mostly completed is a stick-grenade. The design is a loose hybrid of 40K's Krak Grenades and the old German WW2 "Potato Masher." I've blown it up to 300% so it's actually visible without squinting.

I'm also doing two character portraits. The first is of the Heavy Weapons type trooper, with a hardened skull-type cover for his mask.

The second is of a commanding officer.

The final piece in the works is more of an action pose for a trooper in close assault, wielding a bolt pistol and an entrenching tool. 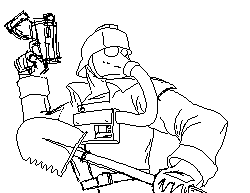 The end goal I'm aiming for is to eventually have a mock-up of a game interface. These character portraits and items would be used in things like character selection/customization, or to identify what unit you're controlling. There's an old 40K computer game called Final Liberation, which is an adaptation of the tabletop 40K Epic rules which I loved to play. It's got old-school pixel art graphic and some really fun turn-based strategy gameplay (when it isn't deciding to crash or hang on newer versions of Windows). I would really enjoy seeing an updated version with new graphics and more armies. Maybe someday...
Tweet