In case it hasn't been clear before now, let me make one thing very clear: I love computers. Tooling around with them is incredibly fun, challenging, and rewarding. That word challenging, though, is a fickle one. Today (and last night-ish), for example, I was presented with two challenges: my main webserver died, then my laptop decided it had had enough of my shenanigans. Despite the stress presented by both events, though, it's been a particularly interesting (and challenging) learning experience.

My laptop's mini-suicide is the least involved, so I'll start there. I was doing some animation cleanup and sprite-sheet compositing in Photoshop, and it was certainly pushing my system hard. Moving the layer groups around was taking upwards of 10 seconds per update, but I figured that it would be ok once I finished my task, saved, and shut down the program. I got a little weirded out when my cursor changed from an arrow to a bizarre vertical dotted line for no apparent reason, but it functioned normally otherwise, so I continued to work. Then this happened:

I honestly have no idea as to the actual cause of that. My only guess is that I was pushing the system too hard, it overheated, and gave up the ghost. I'm thankful that after I let it cool down a while, it started back up just fine.

The real kicker was my server dying. It was originally a desktop box, but its CPU heatsink isn't entirely stable, so I relegated it to less stressful jobs. I had a bios password enabled on it, and forgot to take it off when I installed the server OS. For a desktop, the boot-up password wouldn't be a problem, but on a server it means that I can't do any sort of remote reboot. Easy enough to fix, I thought. Boot up to the bios screen, remove the password, reboot to the OS, and everything will be dandy. And it was, until it didn't boot the OS.

I admit that I panicked a bit at first. I tried reinstalling the OS to reuse the existing partitions, and that didn't work. That freaked me out a bit more, so I mounted a usb key and pulled off all the critical data (website, subversion repositories), and tried a full format and reboot. That didn't work, so I transferred the salvaged data to my secondary server and went home to sleep.

I spent the next morning configuring the secondary server's Apache to replace the old server. Honestly, I was surprised at how quickly it went. It took me several hours over many days to figure out how to get it all set up the first few times. Even though it was much easier and much less painless than I expected, it really drilled into me that I need to get a good backup system in place. Looks like I'll be doing an rysnc/cron crash-course soon.

After work, I discovered the most anti-climactic solution to my server's startup issues. I flashed the bios. I don't know what it changed, but it must have fixed something, because it boots just fine now. Since I re-formatted and re-installed the OS, it'll at least give me a fresh start on building it up more efficiently. Also, my dad gave me a bunch of old drives to use. I'm going to shove a few each into the servers to see if I can't stave off any more massive failures.

Also, as an added bonus, here's a crappy ipod photo my current workspace: 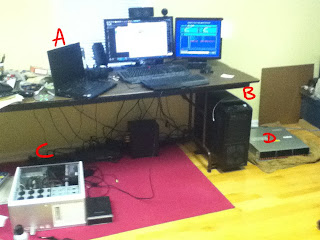 D. is a mystery-box :3 It's not mine, I don't get to keep it, but it was really cool to play around with expensive enterprise-class hardware.

Not shown is my other server, "Merrt" (formerly a desktop named "Asterix"), which is one of my dad's old desktops. It has a 64-bit 2Ghz dual core AMD CPU, 2Gb RAM, a 150Gb drive, and also runs Ubuntu Server 11.

A side bit of fun for me: computer naming. My family has always been a fan of the Asterix and TinTin comic books, so our computers have always been named after things, usually characters, relating to them. I remember at one time, my dad had a trio of servers at his job which he'd named Uderzo, Goscinny, and Herge, after the authors and artists of those two comic series. At home we've had computers named Asterix, Getafix, Geriatrix, Fulliautomatix, Lutetia, Cacofonix, Dogmatix, Tragicomix, Unhygenix, and Panacea.

While I've always loved my family's naming scheme, I've wanted to start differentiating my systems as I starting to create my own networks and administrating my own servers. Thus, I've been naming all my new machines after characters from the Warhammer 40K Gaunt's Ghosts series. With so many good characters to choose from, I have attempted to pair my servers with characters who share similar traits.

The character Shoggy was a trooper who lost his eyes and had them replaced with mechanical ones. He's good at a few things, but can't perform up to the same standard as the rest of the soldiers. Similarly, the server Shoggy has an unreliable heatsink, so I don't trust it to do any heavy lifting, like rendering stuff in 3d.

The character Merrt was an excellent sniper who took a jaw-shot, and had it replace with a mechanical one. He still fights well, but he's no crack shot anymore, and he has confidence issues. Merrt the server was hot stuff when my dad first got him. It was our first 64-bit system, and had an internal RAID system. But as time wore on, he became less shiny, the RAID system started corrupting stuff, and he was finally replaced with new hardware.

I love taking old hardware and making it useful again.

Anyways, enough about computers for now. I hope to have some more fun art to post when I have more free time. :D In the meantime, check out Mighty Rabbit's Website and Facebook page to keep up with what we've been doing.
Tweet