I've been plugging away at the Chub model over the past two weeks or so, and here's what I've got to show for it: 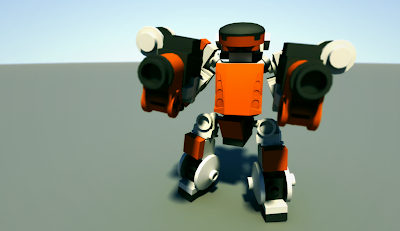 It's been an real learning experience, trying to get this whole thing set up. I've learned a few specific lessons very clearly.

1) Build a library of modeling bits to pull from.

It took me several days to export, clean, and polish each of the LEGO pieces from the CAD programs I found online (MLCAD, LeoCAD), but once the legwork was done, it was extremely easy to fiddle around with building new things. I can only assume that creating a similar library of frequently used shapes/items would be hugely useful to any modeler.

2) Mechanical joints are a pain in the patootie to rig for IK.

The human hip and shoulder each have three axes of rotation all centered on a certain joint area (clavicle/scapula/humerus for the shoulder, pelvis/femur for the hip). LEGOs, being mechanical objects, are not so nice. The equivalent joints on the Chub have the same three axes of rotation, but they are separated into three separate joints, each of which can only rotate along a single axis. Maya doesn't like this. In fact, if you try to set up those joints, limit their rotation, then try to put an IK chain on it, it's more than likely that Maya will just throw up its hands and go "Screw you buddy. I'mma rotate them joints however the hell I feel like!" And then your rig will go crazy.

This can be sidestepped by creating a separate 3-joint IK chain with which to drive the skinned joints. Even so, I've found it to be relatively unpredictable.

3) LEGOs are not meant to animate nicely.

I love the designs of the Frames I'm seeing from Mobile Frame Zero. They look phenomenal. I have very quickly realized, though, that LEGOs just can't be made to animate the way I would like them to. My two tentative solutions to this are to either create my own custom LEGO joint pieces for things like hips/shoulders, or to take these designs as inspiration and create 'real' versions of them. Obviously the second option will take significantly more time and exploration, but it could also yield some really cool work.

I think I'll be putting this project aside for the time being, though, so I can work on a new project that has just recently become available to me: home mo-cap. I went to the East Coast Game Conference last week, and won a Kinect from CineSys Inc.'s booth. I've been wanting to play around with mo-cap over the last few months anyways, but I don't have the money to shell out for the hardware. Now that I have it, though, I'll be working on figuring out how to get it up and running with MotionBuilder. Fun times ahead.